In early 2019 I came up with the probably weird idea to ride my bike from San Francisco to New York City.

If you’re curious to read more or take a look at some photos I took when on the road, check out my sf2nyc.blog blog here on WordPress.

Check out the replay at https://events.sap.com/teched/en/embed.aspx?sid=33416

Your future hasn’t been written yet. No one’s has. It’s you who creates your future. So make it a good one, all of you!

Check out the replay at https://events.sap.com/teched/en/embed.aspx?sid=28917

“As usual, I’m working with stuff that was deliberately designed not to burn. But no amount of careful design by NASA can get around a determined arsonist with a tank of pure oxygen.”
― Andy Weir, The Martian

Watch the keynote replay at https://events.sap.com/teched/en/embed.aspx?sid=26506

Success and failure sometimes are only split seconds apart…

A while ago, I got sick of standing in line for the rental car pickup at the San Francisco airport and got myself the long overdue – admittedly – Gold membership of my preferred rental car company. Not something you have to go round the globe 4 times first. Simply sign up, tell them all your family secrets and file three certificated copies of your medical record with them, but then you immediately get it: your membership card. And from then on, when you arrive with your flight at the airport, an email awaits you to tell you where your rental car is waiting for you: brand, model, stall, license plate. Key inside. Just walk there and off you go. Nice! Life can be a pleasure at times.

Plus, as a good citizen who revealed all of his personal life to get a free membership card, I got an upgrade voucher for my next car rental with them. So I signed up for the upgrade and boosted my corporate standard economy class Kia Rio up to a compact Ford Fiesta. Boy, this was the best upgrade ever that I got. You won’t believe it. Take a look as I got into the city with the Ford via Bay Bridge and went up to Twin Peaks…

OK, I admit, the CDW was included in the price… 😉

Last Sunday was the day: I am slowly recovering, trying to avoid stairs and too much walking around. The only good thing about the pain in the muscles and joints is the fact that you can easily tell they are still there. And that obviously I was putting a strain on them. If it wouldn’t hurt today, I wouldn’t have tried hard enough yesterday. That’s for sure. So all is at is should be, I guess.

San Franscisco Marathon 2013! Starting time was from 5:30am to 6:30am and runners were scheduled to get over the starting line in several waves, each at like 10 minutes distance. Since I was a bit too conservative about my finish time when I signed up last year, I ended up in wave 5 and soon figured out that I was in better shape than anticipated. So I was in a small crowd of people leaving the pack and closing in on the wave that started before us… That pretty much remained the case till during half of the run… Passing people which — actually — is a quite motivating moment when running. I was always thinking how it must feel if you start in a wave that’s too fast for you and you have other runners constantly passing you… Not exactly what I would like to have on my mind for 42 kilometers… 😉

The first 10K were just awesome! What a scenery! Starting at Pier 1, following Embarcadero and passing Fisherman’s Wharf, the Marina and then climbing up the hill towards Golden Gate Bridge which one could see coming closer slowly all the way since Fisherman’s Wharf! Blue skies above, the morning sun covering the Sausalito and Tiburon hills in a warm yellow light! These are the moments when you know why it was worth getting up at 4 in the morning.

Crossing Golden Gate Bridge was an event in itself. I know it may appear a bit sentimental, but this bridge is just a beauty in itself and running across it with thousands of fellow runners made the whole Marathon pay off already. The only downside was the relatively narrow running tracks in both directions and the fact that so many people were “squeezed” together so that getting along at your own pace was somehow difficult. 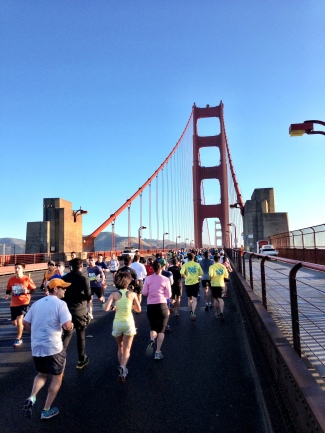 After having passed Golden Gate in both directions, the track turned through Presidio and the city behind towards Golden Gate Park. A nice part of the Marathon with great views onto the Pacific ocean occassionally, finalizing the sections of major ascent along the trail and giving hope to the Half Marathoners that the end — pardon — the finish line was near.

In Golden Gate Park, the Half Marathoners were send towards their finish line, while the Marathoners were send in turns left and write through the park. It felt as if there were water stations every 500 meters — something that would have been helpful rather towards the end of the Marathon where it felt as if they had forgotten one or the other… But perhaps that perception was only the result of my more and more desperate mind 😉

The second half of the Marathon actually was a bit disappointing from a scenic perspective. Leaving Golden Gate Park and going down Haight-Ashbury and Mission, things became more and more “boring” and when things finally turned towards the SF harbour area it was hard for me to keep up a high spirit and the previous pace (I had covered 36k after 3 hours). After several more turns that apparently were leading into the “wrong” direction — I knew the finish line is close to Bay Bridge — the track made it back towards the North, finally passing the AT&T Ballpark and laying out the last 1km in front of me. The last 6k had taken me 39 minutes to finish. Ouch! Couldn’t keep up the prior pace. But getting closer and closer to the finish line, and making it over it finally, was totally rewarding. That’s the moment when the pain of the past hours is all of a sudden forgotten!

I tend to believe that running a Marathon mimics life to some extent — it’s ups and downs, easier parts and more difficult ones, and it is 70% will to make it through and not give up if things become bumpy –, but there’s one big difference: While you can always predict how long a marathon is and what turns its track will take, life tends to have more sudden and surprising changes in direction in stock for you occasionally…

Running the marathon was awesome and I was totally happy to finish it successfully in 3:39h. Fun at its best!

And the City? She again left a mark. I ran the Marathon for her, I believe. And I am sure I’ll be back for another round soon…

Tomorrow’s the day. The day of the race. The San Francisco Marathon 2013.

I am totally excited. I have been waiting for this day for months now. Preparing. Thinking about it. Getting myself ready. Running a marathon in the City. Finally.

This morning I went out for a last run to stretch a bit and see how I feel. A slow and easy run. Not far from my hotel, but taking me to where the start and finish line will be tomorrow. At Pier 1 on Embarcadero. Nothing to see so far of the preparation, but tomorrow morning at 5:30am, when tens of thousands will be eager to get over the start line at a chilly 12°C, everything will be ready.

Let’s see how the 26.2 miles passing through the 49 square miles surrounded by reality will feel like. I am sure it will be fun. A lot of fun actually. And an extra bit of fun when I reach Bay Bridge again and make it over the finish line 😉

The City. I love her. She again leaves a mark.